It’s been a hectic time of late. A lot of fun as well.

Since my last note I became fully immersed in book 2 and was making some good progress. I knew that would end when the manuscript for A Fool’s Errand came back from my editor but it was actually really helpful to get me back into the world addressing new challenges and topics.

I received the manuscript back and I think I handled it well. I couldn’t have asked for a better editor, his process and delivery was so good for me. As this was the first time through this for a fiction novel it was quite a different process for me and I’ve enjoyed it completely.

Me being me I created a spreadsheet of everything he raised, grouped it by Character/Item or Setting and then reviewed each, adding in solutions or answers so I could address them all logically.

I’ll talk more about this in an episode of the podcast. Wait, what? Yes that’s right I’m releasing a new podcast about this series and my writing journey.

After my review and work we met again and discussed what I proposed to work on and now it’s head down working through the whole manuscript.

I’m on a tight schedule and putting myself under pressure to get the book delivered when i want.

Since the manuscript for A Fool’s Errand went off to my editor, I think I’ve gone crazy only three times so far. I don’t have many finger nails left either 🙂

In truth after a couple of weeks of pretending I wasn’t a writer, I have been busy reading the book on my kindle app, to get a feel for it after a break, and more importantly dug book two out of the cupboard, and started back on it.

I’ve also been planning out a new podcast I am starting all about the process I’ve been through and I’ll talk more about how my first draft became two books in an episode of that. Stay tuned for that.

I’ve been applying the processes I developed through the editing of A Fool’s Errand to put the nearly 90,000 words of book two into shape, and revisiting some characters I introduced there whom I love.

I have three weeks messing about on this before I get the original manuscript back and then it will be a race to get the book ready for my beta readers and proof reader.

I’ve been starting to look at some of the marketing strategies for the launch in September, and while I won’t be making a huge fuss of it, I’ll be wanting to get it out there.

Current plan is a September launch and then April 1 launch for book 2.

Well the time has arrived, and today the manuscript for A Fool’s Errand has gone off to my editor. For a first time author this is quite a big moment. It’s both exciting and a little nerve racking.

One of the challenges in transitioning from “I’m writing a book” to “publishing a book” is being able to let go. Handing the book over to someone else to review, edit and critique is a personal challenge, but it’s the only way to get the book done.

There’s always a moment in any project where you have to say that enough is enough and it has to be set free. This week that happened for me and now I get to sit nervously and wait on what comes back.

In fact now I have to catch up on all the things I put off, like fixing some things on this site, reworking my newsletter and in general preparing for publishing.

I’ll be cleaning up the wiki I have for the series, starting to pull out book 2 and start my story grid spreadsheet on that in preparation for taking the 80,000 odd words already written and building out a full novel from it. 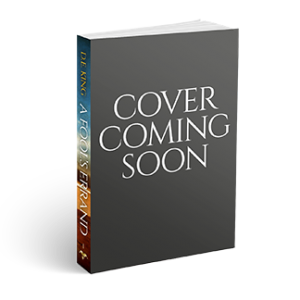 Episode 2: Surviving the editor and a little world building

By DE King Jul 11, 2020
In this episode I set up the format and talk about receiving my first developmental edit response and some world building.

By DE King Jul 09, 2020
An introduction to the new podcast and an outline of what I will be doing with it.